Robert Pattinson, James Franco, and Nicole Kidman bring love, lust, and adventure to the Middle East in their new movie “Queen of the Desert.”

The biographical film from director Werner Herzog is based on the life of Gertrude Bell (Nicole Kidman), a historian, writer, and member of the British secret service who is revered as “the female Lawrence of Arabia” for making an imprint on Middle Eastern politics in the 1920s.

According to an official synopsis via Indiewire , “As an educated young woman, for whom no suitable husband can be found in England, she journeys to Tehran. After a tragic love affair with diplomat and inveterate gambler Henry Cadogan, she decides to give up on her private life and discover the region as an explorer.”

In the first official trailer, Pattinson can be seen donning traditional Middle Eastern garb for his role as T.E. Lawrence, while Franco takes on the part of Kidman’s lover.

I have add photos from Queen Of The Desert’ press conference & Queen of the Desert’ Photocall – 65th Berlinale International Film Festival to the gallery. 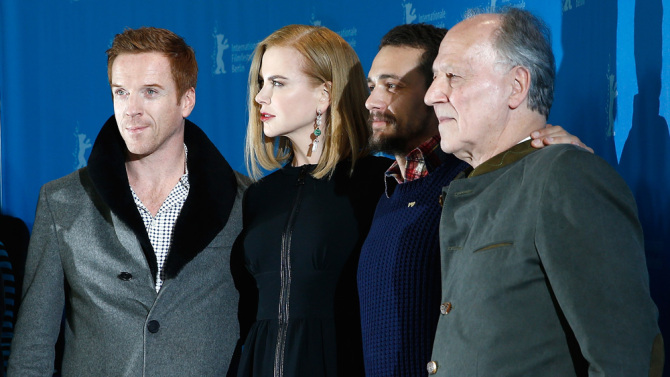 BERLIN — Nicole Kidman, James Franco and Damian Lewis spoke about their experience of working with director Werner Herzog, vultures and camels at a Berlin press conference Friday for Herzog’s “Queen of the Desert,” which plays in competition at the Berlin Film Festival.

The film centers on explorer Gertrude Bell, who has been described as “the female Lawrence of Arabia.” Bell traveled across the Middle East in the first decades of the 20th century, and helped define the borders of the region’s emerging nations.

But despite her decisive political role, it was Bell’s inner life that Herzog sought to capture. “Her interior life was more fascinating than the political complications of the last years of her life,” Herzog said.

It was Bell’s romantic affairs with James Franco and Damian Lewis’ characters — Henry Cadogan and Charles Doughty-Wylie — that engaged Herzog’s interest. Franco said that it was the first time Herzog had shot a film with love storylines so “it was fun for me to watch Werner figure out these scenes that he didn’t have tons of experience doing. It was almost like watching a master tackle something new,” Franco said.

The director said that the chemistry between Kidman and Franco was critical.

“When you cast a film, chemistry is everything,” Herzog said. “If the chemistry is not functioning you are lost with a story and lost as a director, and I think it was very easy for Nicole to connect as an actress with two great actors [Franco and Lewis], but there was more than just great acting, there was some internal chemistry.”

Kidman said the location, Morocco, also played an important role in the film. “Werner chooses to go to the places where his movies are set. He is not a green-screen type of guy. The beauty of that landscape, and I have a huge love of the desert, infiltrates the relationships,” Kidman said.

She added that one of her favorite scenes was when she and Franco climbed a tower, where a vulture was sitting. She said that Herzog had found the vulture, with its owner, by the side of the road and decided to put it into the film. Franco added that the vulture was not trained for such screen roles, and tried to peck Kidman, but luckily it was on a leash.

Later Franco and Kidman run off into the desert and kiss. “We get to kiss in this vast landscape, in this desert, and that is just exquisite as an actor to be in the actual place that we are meant to be,” she said.

Herzog said that “there was something in the landscape that was extraordinary and the desert hasn’t been filmed like this before.” He said that they filmed in a real sandstorm, and some of the lenses were damaged because of this.

He said it was not just focused on the desert but also the people in the desert, the Bedouins. “It is about the Bedouins and the dignity of life under Islam. There is a certain warmth about what we encountered out there. Nicole Kidman’s character, Gertrude Bell, immediately falls in love with this world, and the texture of what we see there — a world that has been somehow vilified and demonized in the media recently. And there are reasons for that, of course. But it shows a different side of that. The story makes it necessary that there are all these interactions, including with a young Lawrence of Arabia, who plays a small part here. So it is a big tapestry.”

Kidman said that on the same day that she arrived in Morocco she had to learn to ride a camel, but she took these challenges in her stride. “I’m at a place in my life where I’m looking to go to different countries and explore new stories, and push out of my comfort zone. I don’t want to be sitting at home and driving to the studio to make a movie. So when Werner said would I go to Morocco and live in the desert with him, I said: ‘Can I take my children?,’ and he said: ‘Yes, there’ll be a tent for the children.”

Herzog said Kidman had “an incredible work ethic,” and appears in every scene in the film, with the exception of the first one.

Talking about the importance of locations, he said: “I have always considered the landscape — for example the jungle in ‘Fitzcarraldo’ — to be an inner landscape, the landscape of fever dreams. Here the desert is also an inner landscape, something that is inside of [Gertrude Bell’s] heart and becomes part of her character. That is a transformation that I know how to do and what I get paid for.” 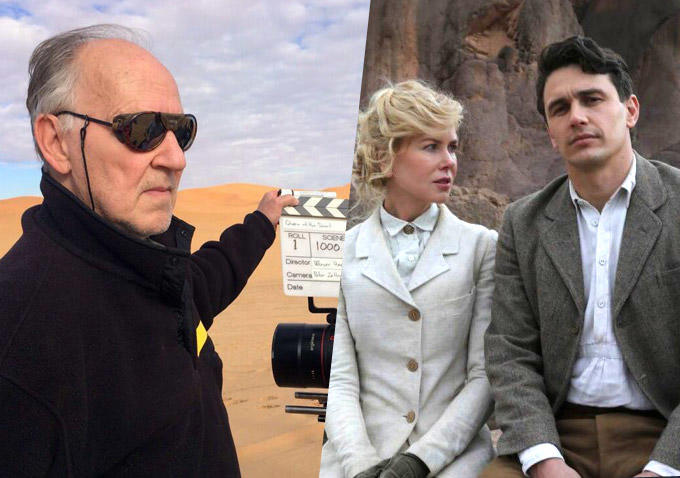