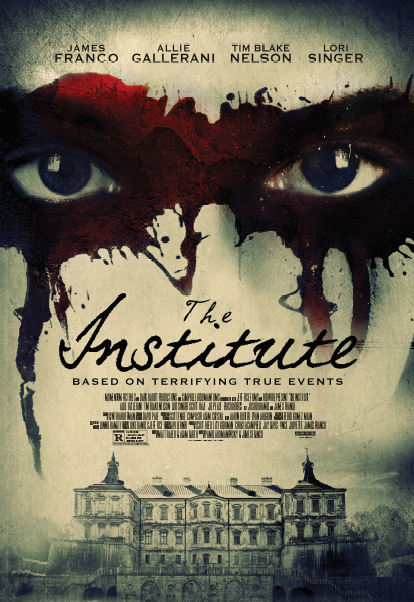 The James Franco, directed and produced period piece The Institute, which which he also stars, will be released on March 3 by Momentum Pictures both theatrically and on VOD. The film marks the third collaboration between co-directors Franco and Pamela Romanowsky.

Set in 19th century Baltimore, thee film tells the story of Isabel Porter (Allie Gallerani) who, stricken with grief from her parents’ untimely death, voluntarily checks herself into the Rosewood Institute. Subjected to bizarre and increasingly violent pseudo-scientific experiments in personality modification, brainwashing and mind control, she must escape the clutches of the Rosewood and exact her revenge.

Besides Franco, the film is produced by Vince Jolivette, Jay Davis, Christa Campbell, Lati Grobman, and Scott Reed, the film is a production of Rabbit Bandini Productions.

James Franco has returned with season 3 of “Making a Scene” and the Emmy-nominated spoof series has found a new home on the forthcoming video service from French startup Blackpills, after AOL carried the first two seasons.

The first two seasons of “Making a Scene with James Franco,” which he directs and stars in, featured mashups of movies (season 1) and TV shows (season 2). For the latest installment, Franco and team decided to create episodes spanning films, music and television. The focus of each episode in season 3 will be randomly determined by a dart board and a spinning wheel, which is one of the show’s trademark elements.

“Making a Scene with James Franco” is slated to debut in April on Blackpills, the yet-to-launch video service founded by Deezer cofounder Daniel Marhely and ex-Canal Plus exec Patrick Holzman. Other productions Blackpills has acquired or commissioned include Adaptive Studios’ short-form thriller “Pineapple” and projects from social-media influencer Logan Paul and filmmaker Luc Besson.

Season 3 of the series was produced by INE Entertainment and Franco’s Rabbit Bandini Prods.

“Since we were kids, music videos have been such a big part of pop culture for us,” Vince Jolivette, co-founder of Rabbit Bandini, said in statement. “So it seemed natural for us to take what we’ve been doing with our favorite movies and television shows and apply that same creative madness to some of our favorite, iconic music videos.”

“Making a Scene with James Franco” was packaged by CAA. Franco is currently repped by UTA.

share
The Deuce, Starring James Franco, is Coming this Year

We haven’t heard much of anything about the James Franco-starring The Deuce except for the fact that it is, well, coming. Good thing, then, that HBO announced at the TCA press tour that we can finally expect The Deuce in 2017. We will unfortunately have to wait a bit longer on the details, but such is life.

The pilot was actually filmed back in 2015. That fine; it takes time to build quality. The Deuce will also star Maggie Gyllenhaal as Ellen “Candy” Merrell,” a sex worker in the Times Square area. That’s already a strong cast. For what it’s worth, Ewan McGregor will star in the third season of Fargo this year, also playing two brothers. It’s going to be an interesting year.

Simon has been working with George Pelecanos, his usual partner. We expect great things from anything David Simon is involved with, and The Deuce is no different. While we don’t know exactly when it’s going to premiere, we can safely say that it won’t be coming this winter, or likely in the spring. The will be a second half to year show, or possibly at the end. Either way, we’re excited to see just how weird James Franco can get with this. And for other things, of course.

Lifetime has unveiled its latest slate of original movies, and they include not only the return of James Franco but the debut of Viola Davis.

“High School lover,” executive produced by James Franco, stars Franco as the father of a high school student (Paulina Singer) who falls in love with a much older man (François Arnaud). Papa Franco must intervene before the crush turns into a dangerous obsession. Jerell Rosales directs from a script written by Amber Coney (“Mother May I Sleep With Danger?”) and Jessica Dube. “High School Lover” will premiere Feb. 4.

“Britney Ever After,” starring Natasha Bassett as Britney Spears, will cover the pop star’s rise and fall and rise again. It is produced by Asylum Entertainment for Lifetime. Steve Michaels, Jonathan Koch and Joan Harrison are executive producers. Leslie Libman (“Manson’s Lost Girls”) directs from a script from Anne-Marie Hess. “Britney Ever After” will debut Feb. 18.

“Custody,” executive produced by Viola Davis and starring Davis, Hayden Panettiere, Catalina Sandino Moreno, Ellen Burstyn, and Tony Shaloub, premieres Mar. 4. The story revolves around three women who are brought together when a hard-working single mother (Moreno) has her children taken away from her. Panettiere plays the recent law school grad charged with representing the mother, while Davis plays the judge on the case.