I have DVD caps of Wild Horses to the gallery.

At 84, Robert Duvall shows no signs of slowing down on the big screen.

The above exclusive trailer for Wild Horses showcases the Oscar winner —

most recently seen opposite Robert Downey Jr. in The Judge — who wrote, directed, and stars in this cowboy crime drama. 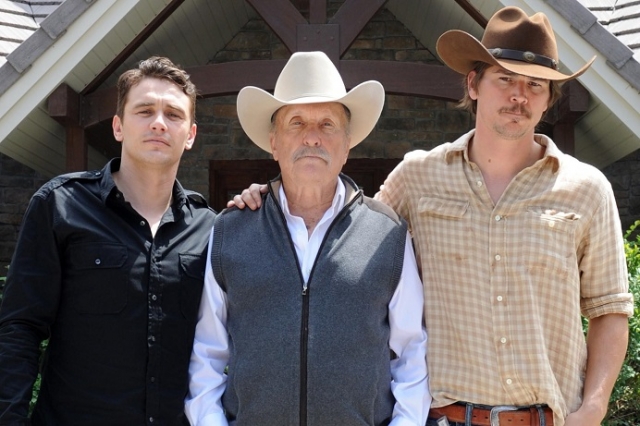 Wild Horses has a good film hidden inside it, if only writer/director/star Robert Duvall could have found it. Centered on a disturbing mystery, the film takes constant, bizarre and unsettled shifts to comedy throughout, making it far more uncomfortable to watch than it should be.

Duvall plays Steve Briggs, a retired Texas Ranger haunted by the disappearance of a young Latino boy who had a relationship with his youngest son 15 years earlier. As the boy’s disappearance reaches the 15th anniversary, his mother (Adriana Barraza) has the Texas Rangers look into the case once again.

Meanwhile, a new reading of Briggs’ will brings his three sons back together. Devon Abner and Josh Hartnett star as the older brothers, while James Franco pops in for an affecting performance as the youngest son. There’s the typical clash of cultures within the family, of course, since Briggs doesn’t exactly approve of his son’s behavior.

While this all has the making for an in-depth, serious modern Western, Duvall continues to inject odd humor that doesn’t really fit in with the film’s overall tone. It’s clear that he didn’t want to go super serious, like No Country For Old Men, but ongoing jokes about Duvall’s age are unnecessary. There’s also added plot elements (like Briggs’ refusal to accept his housekeeper’s daughter as his own – when she is in reality) seem to only exist to belabor the point that Duvall’s character is old.

Duvall also made the questionable decision of casting his wife, Luciana, as the lead Texas Ranger on the case. It really is remarkable to have a female lead on the case, but one can’t help but wish he cast a more experienced and talented actress in the part. Thankfully, he made some wise decisions with other roles, as Franco excels as the young son. But it’s hard to buy Hartnett as a cowboy.

Wild Horses at least looks beautiful and was photographed by Barry Markowitz (Crazy Heart). However, it’s not a modern Western masterpiece. It’s a story that really just happens to take place in Texas (although filmed in Utah) and not about life and clash of cultures in Texas.