As a writer stymied by past success, writers block, substance abuse, relationship problems and a serious set of father issues, Elliott’s cracked-out chronicle of a bizarre murder trial amounts to less than the sum of its parts. Not long into the 2007 trial of programmer Hans Reiser, accused of murdering his wife, the defendant’s friend Sean Sturgeon obliquely confessed to several murders (though not the murder of Reiser’s wife). Elliott, caught up in the film-ready twist and his tenuous connection to Sturgeon (they share a BDSM social circle), makes a gonzo record of the proceedings. The result is a scattered, self-indulgent romp through the mind of a depressive narcissist obsessed with his insecurities and childhood traumas. 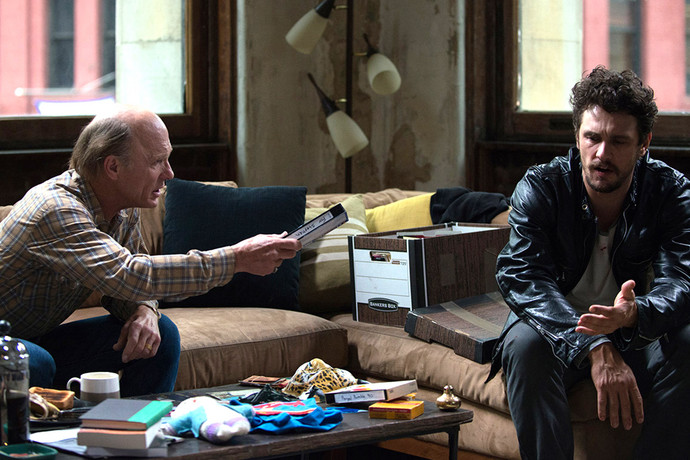 In his new Tribeca Film Festival movie, “The Adderall Diaries,” James Franco gets to dig into real-life author Stephen Elliott, a man whose works dance on the razor’s edge where truth and lies meet. In the film, those lines blur in spectacularly destructive fashion, when aspects of Elliott’s latest memoir become challenged by reality — specifically, that his “dead” father is very much alive.

For Franco, playing in Elliott’s world, as Elliott himself, presented a unique challenge as an actor, getting to dive headfirst into the author’s “raw” depiction of himself.

“One of the best things about Stephen Elliott’s work is he uses himself, always,” Franco told MTV’s Josh Horowitz about the appeal of the man at the heart of the movie. “I’m sure he gets criticism for that, but also a lot of the attention he gets is because he does that so well and puts himself at the center so well and portrays himself in such a raw way.”
“That is interesting to me, just as a creative person, putting oneself into the work,” he continued. “Not just in the sense of straight memoir, ’Let me tell you what happened,’ but also putting a certain amount of craft or spin on it. Maybe some people would call it creative non-fiction.”

The creative license Elliott applies to his “memoirs” might inspire controversy from some people in his life, according to Franco, but that only speaks to the creative goal he believes Elliott’s trying to accomplish.

“Some of the people in his life, like his father, will start to question his version of things,” he said. “But I think the real Stephen would argue, ’Well, this is my creativity. This is the way that I work. I’m not here to write a memoir. I’m here to create a piece of art.’”

James Franco and Amber Heard are at it again.
Seven years after having appeared together in Pineapple Express, the two have reunited for The Adderall Diaries, a film adaptation of Stephen Elliott’s best-selling memoir of the same name.
“James and Amber have great chemistry,” the movie’s director Pamela Romanowsky told us Thursday at the Adderall premiere at the Tribeca Film Festival. “As a director, it’s really exciting to see two people who haven’t spent much time together come into a room to do a scene and find this connection and electricity between them. It was really exciting to watch.”
Franco stars as in the movie as writer with many issues, including substance abuse problems. Heard plays his New York Times crime reporter love interest.
The cast also includes Ed Harris, Christian Slater, Cynthia Nixon and Wilmer Valderrama.
“James and I met at grad school we both did the [New York University] film program and had been friends and I worked on a short film with him. We really loved working together,” Romanowsky said. “He had optioned Adderall Diaries a few years before and offered it to me to write and direct. It was already a book that I had read and loved so it felt like a perfect fit so we embarked on it from there. That was about three years ago.”
Heard said she was attracted to the project because they didn’t try to sugarcoat it to make it appeal to a larger and more mainstream audience. “You could call it dark, but the story to is about memory, it’s about life, it’s about relationships,” Heard said. “It didn’t seek to taper that to make it more palatable.”
If you’re wondering if Franco has had any real-life experience with Adderall, he made it perfectly clear he doesn’t. “I don’t. I don’t,” he said. “I can’t say that I do.”
We are very happy to hear that.