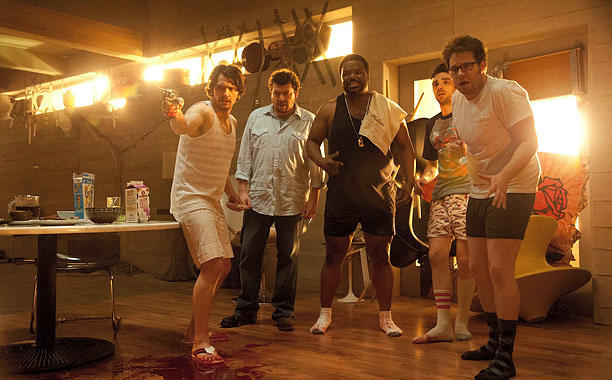 Universal Studios Hollywood is bringing some humor to this year’s Halloween Horror Nights, with a new attraction inspired by the apocalypse horror comedy This Is the End.

Stars Seth Rogen and James Franco teamed with the Los Angeles theme park to announce a 3-D maze based on the 2013 movie, which saw the actors playing versions of themselves as end-times survivors trying to avoid the horrors of hell after the righteous have been raptured. The film also starred Jay Baruchel, Jonah Hill, Michael Cera, Emma Watson, Danny McBride, and Craig Robinson, among others.

Rogen, Franco and Hill collaborated with Universal Studios on the maze, which transports guests to Franco’s movie-house, in which the actors are trapped in the film. “We’ve been working with them on it for a few months,” Rogen wrote on Twitter. The This Is the End maze joins a slate of previously announced Halloween Horror Nights attractions from high-profile franchises, including The Walking Dead, Crimson Peak, Insidious, and John Carpenter’s Halloween. The scare-fest runs select nights from Sept. 18 through Nov. 1.

“This is the End brings a new dimension of fear to Halloween Horror Nights by fusing the best of two extreme worlds — horror and comedy — to create a literal and figurative three-dimensional experiential version of the film,” said John Murdy, creative director at Universal Studios Hollywood and executive producer of Horror Nights, in a news release.

Will the maze end with a Backstreet Boys dance party? We can only hope (or pray).