In the above promos, the actor reveals that — due to all of the “cool experimental stuff” he likes to do — this week’s show is going to be in black-and-white and 3D. And although it’s highly doubtful that Lorne Michaels is actually going to let Franco take charge of the show’s artistic direction, fans can hope that one day the actor will have his 3D dreams realized.

For now, according to Cecily Strong, if Franco thinks of something happy and just believes, one of his wishes will come true. So, washing himself over with “Christmas magic,” the actor chants “believe, believe, believe,” and a sandwich suddenly appears in his hands. As Franco says, “It’s a Christmas miracle!”

In the rest of the clip, Franco shows off his ability to go to one of his Yale classes and shoot a movie in mere seconds and admits that the only reason he’s hosting the show is so he can get laid. Also look out for a cameo appearance by a former denizen of “30 Rock.”

share
WHAT TO WATCH THIS WEEK ON TV: FRANCO FANS REJOICE 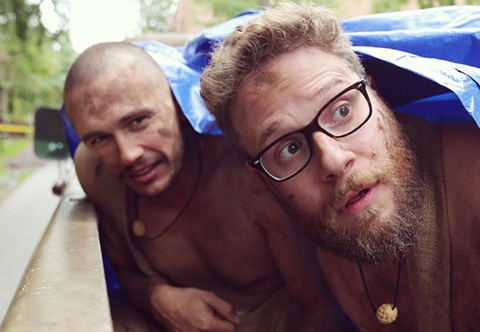 It’s a big weekend for James Franco fans. The multi-multi-hyphenate hosts Saturday Night Live with musical guest Nicki Minaj 11:30 p.m. Eastern on NBC. On Sunday, he strips down and heads into the woods with his buddy Seth Rogen for a very special episode of Naked and Afraid 8 p.m. Eastern on Discovery.

James Franco, Martin Freeman, and Amy Adams will be the final three Saturday Night Live hosts of the year, NBC announced Thursday. Franco will host the Dec. 6 show with Nicki Minaj as musical guest.
The following week, Hobbit and Sherlock star Freeman will be accompanied by Charli XCX. Adams will host the final show before Christmas Dec. 20 with musical guest One Direction, so look out for screaming teens around 30 Rock that week.
Franco has hosted twice already and Adams, who will be promoting Tim Burton’s Big Eyes, has hosted once. Freeman’s show will be his first time hosting.