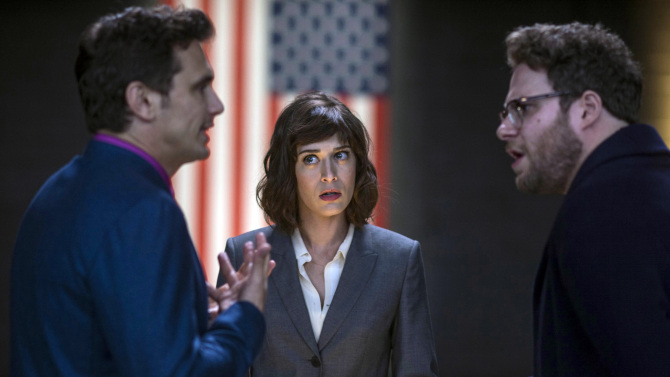 In announcing the decision to cancel the holiday debut, Sony hit back at the hackers who threatened movie theaters and moviegoers and who have terrorized the studio and its employees for weeks.

“Those who attacked us stole our intellectual property, private emails and sensitive and proprietary material, and sought to destroy our spirit and our morale – all apparently to thwart the release of a movie they did not like,” the statement reads.

“We are deeply saddened at this brazen effort to suppress the distribution of a movie, and in the process do damage to our company, our employees, and the American public,” it continues. “We stand by our filmmakers and their right to free expression and are extremely disappointed by this outcome.”

The studio did not say it would never release the picture theatrically. Insiders tell Variety that Sony is exploring all options, including offering the picture on premium video-on-demand as a way to recoup at least some of its investment.

The comedy centers on a hapless television host who is recruited to assassinate North Korean dictator Kim Jong-un. The country has condemned the film and some cyber-security experts believe that it played a role in the hacking attack on the studio. North Korea has denied involvement in the attacks.

Seth Rogen and James Franco star in the picture, which cost $42 million to produce.

Sony has been reeling for weeks since hackers broke into the studio’s computer system in November and stole internal documents, email messages, film budgets, spreadsheets detailing top executive salaries and the social security numbers of thousands of employees. The documents and records were subsequently leaked online, setting off a firestorm of media coverage.

Tuesday’s message accompanied another data dump. It threatened violence on theaters that showed “The Interview” and people who attend screenings.

“The world will be full of fear,” the message reads. “Remember the 11th of September 2001. We recommend you to keep yourself distant from the places at that time. (If your house is nearby, you’d better leave.)”

In response, exhibition industry lobbying arm the National Association of Theatre Owners said its members must decide individually whether to release the picture and Sony said it would respect theater owners’ decision not to exhibit “The Interview.” That set off a cascade of cancellations.

The bulk of the country’s 10 largest theater chains — a group that includes AMC, Regal, Cinemark, Carmike and Southern Theatres — announced they would delay showing the picture or would drop it altogether. In statements, many of the theater chains suggested that Sony’s lack of confidence in the film prompted their decision.

Regal, for instance, said its decision was “due to the wavering support of the film ‘The Interview’ by Sony Pictures, as well as the ambiguous nature of any real or perceived security threats.”

Sony was more conciliatory even as it said exhibitor defections motivated its decision.

“We respect and understand our partners’ decision and, of course, completely share their paramount interest in the safety of employees and theatergoers,” the studio’s statement read.

Bruce Nash, founder of box office site TheNumbers, said that Christmas is one of the busiest times of year for moviegoing and is particularly strong for family films. Any perceived danger or threat might have depressed ticket sales.

“It was never going to be one of the big films of Christmas and clearly chains are going to be concerned about making sure people feel comfortable bringing their children to ‘Annie,’ ‘Into the Woods’ or ‘Night at the Museum,” said Nash.