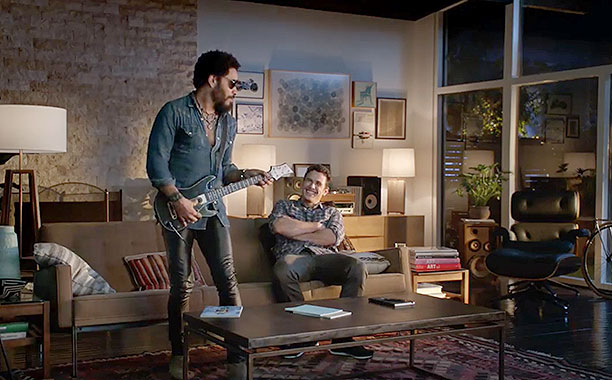 Lenny Kravitz knows how to rock out, but occasionally, as this summer revealed, some other things may come out as well. Luckily, the rock star has James Franco to help him keep things under control.

Guitar Hero Live reintroduces the series after a five-year hiatus (as does its competitor Rock Band), with a new take on the rhythm gaming genre. Gone are the familiar five colorful buttons of plasitc guitars past. Instead, players tap on two rows of three buttons for single notes and chord-like shapes on a new guitar peripheral. The series has also shed the band focus it adopted in later entries to just be about guitar, with a campaign mode featuring a live band and audience that reacts to your playing, and a streaming music service that eschews the traditional downloadable song model.

Guitar Hero Live will be available for the PlayStation 4, PlayStation 3, Xbox One, Xbox 360, and Wii U on Oct. 20, with a planned mobile release as well