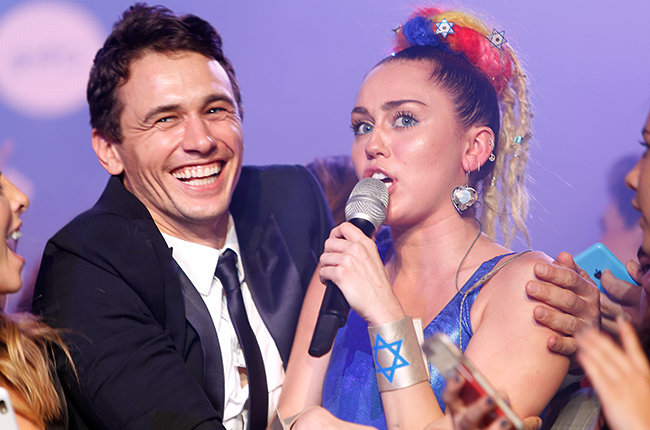 Down on Sunset Boulevard, the sun has set on this Saturday (Oct. 17) sabbath and for one night only at the Hollywood Palladium, actor James Franco will finally become a man. Mazel tov!
In the Jewish culture (Franco’s mother is Jewish), when a male celebrates his 13th birthday he takes to the pulpit of a synagogue, recites a portion of the Torah and has a stereotypically lavish celebration for friends and family who are encouraged to shower him with gifts. Franco, however, never enjoyed this rite of passage as a 13-year-old.

For an evening here billed as “James Franco’s Bar Mitzvah,” 37-year-old Franco has prepared the portion of Noah, he says, by watching the Darren Aronofsky directed movie on Netflix. Not yet circumcised he’s encouraged by the evening’s host — his partner-in-crime and best friend Seth Rogen — to have a mock onstage circumcision by “Rabbi Goldblum” (i.e. Jeff Goldblum), who enters reciting a Hebrew blessing over Franco’s soon-to-be-forgotten foreskin.
This is swiftly followed by a Jewish hora dance also done at weddings, expertly led by Jewish rock trio Haim with frontwoman Danielle on drums and bassist Este on lead vocals. She belts out “Hava Nagila” as the band is joined by a line of hora dancers onstage. There’s also a magician, as often found at bar mitzvahs, and a live party band to close out the evening named Miley Cyrustein & The Super Jews (fronted by Miley Cyrus in a blue leotard with an enormous Star of David around her frame).

Except, this slim interpretation of what constitutes a bar mitzvah is all for a good cause, namely Hilarity For Charity. The event was also broadcast on live on Funny Or Die. Franco’s three-hour lavish celebration-turned-variety-show does involve highly generous cash endowments, but all from bidding members of the audience who are donating to an organization birthed by Rogen and wife, Lauren Miller Rogen, in 2012.

One item for auction is a yarmulke — the skullcaps Jewish men cover their heads with at such traditional occasions. Instead of being inscribed in the typical fashion (“in celebration of James Franco’s Bar Mitzvah”), this particular yarmulke is signed by Rogen and comedian Bill Hader, who was also in attendance. It went for $3,400, despite Hader’s berating of every bidder: “For this?!” he jests, goading several wealthy members of the audience.

Saturday was less about bar mitzvahs and more about mitzvahs, which is Jewish lingo for “good deeds.” There was a lot of Jewish lingo. Serviettes line the bars, scrawled with the words: “Wipe that schmutz off your face.” It’s exceedingly silly, but it’s also intended to take the sting out of something that isn’t silly at all.

Now in its fourth year, Hilarity For Charity raises awareness of Alzheimer’s Disease among younger generations. As Lauren Miller Rogen, whose mother was diagnosed with the disease, informed guests that the charity had already made over $4 million in as many years. And the event reaped a cool $2 million before the evening’s action even began.

When things kicked off, they were accompanied by a familiar kletzmer violin from the introduction to Fiddler on the Roof. Seth Rogen enters dressed as lead character Tevye, banging on his chest and hollering “Tradition!” (again, please note that this is not officially part of proceedings at bar mitzvahs; Fiddler on the Roof centers around three marriages, and there are no sons to speak of).

Rogen explained the reasoning behind this year’s theme for the evening. He has been on a quest to recruit “better looking Jews” to the faith, hence encouraging Franco to be bar mitzvah’d several weeks ago at his house (it happened, we see the footage). Saturday was a far cry from Rogen’s own bar mitzvah, which he recalled saw him “trying to get a hand job as Cotton Eyed Joe played”.

This was an evening of side-splitting laughter, overwhelming audience generosity, rousing insights into the effects of Alzheimer’s Disease and bountiful hospitality. The ultimate highlight, however, came with Rogen’s final introduction.

“This is so much better than when they played ‘Barbie Girl’ at my bar mitvah,” he said, as a band of men in muscle suits take to their instruments.

“The Super Jews” were joined by their frontwoman Cyrus, who knows how to get a bar mitzvah party started — with a cover of Rick James’ “Super Freak.” “Things are going to get a bit ridiculous,” she said. “And that’s coming from someone who flew around on a giant hotdog for 20,000 people for several months last year.”

From the ridiculous to the sublime, she took on a cover of Leonard Cohen’s “I’m Your Man” and dedicated it to the bar mitzvah boy himself. As she thrusted her leotard-encased hips into her mic stand, her long braided extensions swing from side to side in a high-knotted pony tail on her head, and she momentarily reminded me of legendary punk Ari Up, if Ari had entered the Eurovision song contest on behalf of Israel instead of becoming the frontwoman of The Slits.

This is only my second ever bar mitzvah,” Cyrus said. “And this song hadn’t come out last time I went to one. But I hear it pops the f–k off when they do it at a bar mitzvah.”

She stormed into an acoustic version of her own global smash “We Can’t Stop,” which did indeed get things turnt in time for the grand finale and a last request from Seth Rogen. Only a former bar mitzvah boy knows the ultimate number to end an evening of schvitzy dance floor shape-shifting. It’s “Shout” by Lulu, and Miley had the pipes to deliver.

As everyone jumped up on stage to join her, including all of this evening’s entertainers, things turned into a big old mess. The charitable earnings prove that you don’t always have to grow up to get the job done.