This holiday season, James Franco and Seth Rogen are going to try and kill the leader of North Korea in “The Interview,” but as you might expect, they are not the most likely of assassins. It’s not exactly the meatiest of comedic hooks, but if anyone can make it sing it’s these two, and they are taking their personalities from the film to the next level.

In “The Interview,” James Franco plays the host of celebrity TV tabloid show “Skylark Tonight,” with Rogen as his weary producer (they land an interview with Kim Jong-Un, and are then recruited by the CIA to take him out) and it’s in that guise that the promo run for the comedy has taken an interesting shape. The latest nugget to pop out is Skylark’s chat with a game Orlando Bloom, which immediately goes off the rails when the host is astonished to learn that the actor is not knighted. If you like that, then be sure to check out Skylark’s full-blown half-hour MTV special that aired over the summer, that features more interviews with Nicki Minaj and Iggy Azalea.

Motorola hasn’t officially announced the existence of its upcoming Droid Turbo smartphone yet, but the Kevlar-coated device has appeared all over the internet, with leaked images showing the Android phone’s red and black variants. With the Droid official Twitter account posting teasers for the Turbo, it can only be a matter of time before the phone gets an official release — even actor James Franco has one.

Franco — poet, polymath, and star of pot comedy Pineapple Express — appears of a new viral ad for the Droid Turbo. The 30-second clip shows Franco being filmed by a fan as he’s riding a bike in a button-down shirt. He engages in small-talk with the unnamed cameraperson, flashing her a sinister grin, before peeling off into the darkness. In a second he’s back again, pulling out his red Droid Turbo to take a picture of the people filming him. The viral short appears to be emphasizing the Droid Turbo’s speed: Franco tweeted it alongside the hashtags #FrancoFast and, with slightly less subtlety, #ad

Me on a bike … even their camera can’t keep up #ad #Droid #FrancoFast http://t.co/SzQzWw1YFX

In “Good People,” a young American couple (James Franco and Kate Hudson) living in London falls into terrible debt for all the right reasons.

One morning they discover the tenant in their downstairs apartment has died and left behind $400,000 in cash. All they have to do is take the money, and all of their problems will be solved.

Of course they take the money, but that’s when very bad things start happening to good people.

The spookiest day of the year is just a week away, but James Franco and Megan Fox are already getting into the spirit of things.

The actor posed with the Transformners star in an Instagram snapshot which showed her sporting a long white feathered nightdress soaked with fake blood.

‘Megan Foxxy is the best,’ the shaven-headed actor wrote alongside the picture which showed Megan looking rather pouty in artfully applied make-up and loose tumbling hair. It is unclear what project Fox and Franco were working on together or where the photograph was shot.

The 36-year-old star wore an all-black outfit and moustache as he sat on a staircase beside the actress.

James is no stranger to cryptic Instagrams, having recently posted a few shots of himself and actor pal Seth Rogen posing nude outdoors.

‘Boom boom, NAKED and Afraid. Me and Seth, in the bush, naked, together. For reals,’ he wrote alongside one shot.The actors hinted may have something to do with the Discovery Channel television show, Naked And Afraid.

One snap shows the men entirely naked (but pixelated from the hips down) and covered in bits of dirt, with canvas bags slung over their shoulders and brown pendant necklaces around their necks.

Those bags and necklaces are the same ones used by the documentary series.

The popular show usually follows two strangers who meet for the first time and must figure out a way to survive – i.e, find food and shelter – whilst naked. 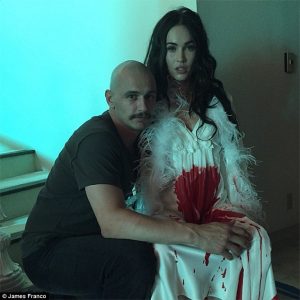 In Richard Linklater’s coming-of-age film Boyhood, being a teenager looks like a lot of fun. The sense of possibility is palpable, and the world seems like an endless stream of opportunities for the taking. In Palo Alto, being a teenager looks bewildering and the world seems utterly incomprehensible.
Adapted from a series of short stories by modern Renaissance man James Franco, the sleepy Californian suburb of Palo Alto epitomises a typical American town. Gia Coppola, Sofia’s niece and Francis Ford’s grand-daughter, has streamlined the narrative for this, her debut feature film, weaving several stories of adolescence into one quiet, but affecting film.
Emma Roberts gives an unusually vulnerable performance as class virgin April who falls for Mr B (Franco), an unnerving PE teacher who preys on members of the girls’ soccer team. Practically every adult in the film is a mess, from self-involved vaping mothers to depressed, suppressed homosexual fathers. With examples like these, it’s a wonder anyone comes out alive, let alone emotionally intact.
Coppola’s voyeurism is more sympathetic than her aunt’s, and she poignantly captures a moment in our lives when we’re uniquely beautiful and inquisitive, but without the tools to deal with either gift.

Today, AOL Originals unveiled three all-new episodes of its 10-episode comedy “Making a Scene With James Franco,” an innovative comedy showcasing Academy Award nominee James Franco’s recreation of cinema’s most iconic moments. Whether it’s an irreverent twist on genre or a mash-up of two entirely different scenes, the series throws convention out the window and in the end delivers a truly unique— and always hilarious —twist on cinematic history. The latest installments of “Making a Scene”—all available now—deliver a trio of fresh mashups, including “I’m the King of Wayne’s World,” an absurdist look at what happens when “Wayne’s World” poses as “Titanic”; “Forrest to the Future,” a glimpse at what might have been if “Back to the Future’s” Doc Brown took a journey with the titular Forrest Gump; and “I’m the One That I Want,” a new, narcissistic slant on mega-musical “Grease.” Making a Scene With James Franco is a 10-episode comedy on AOL Originals.

We sat down with the actor, author, artist and photographer to discuss “Making a Scene With James Franco”—a project born of the film buff’s love of movies and a childhood spent acting out scenes with his brothers—his favorite films and what iconic movie he fervently wishes he had been cast in.

END_OF_DOCUMENT_TOKEN_TO_BE_REPLACED

Welcome to WordPress. This is your first post. Edit or delete it, then start blogging!